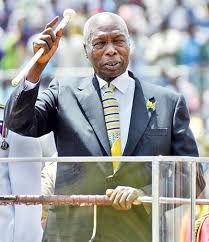 Just like Nelson Mandela who believed that Education is the most powerful weapon that you can use to change the world, President Daniel Toroitich Arap Moi recognized education as a great vehicle to bring equality of opportunity to Kenya. He was a teacher before venturing into politics and believed that if Kenya was to achieve its aspirations, the youth had to be educated.

Despite immense economic and political challenges, Moi used his presidency to fashion Kenya as one of Africa’s most educated country.  When Moi ascended to the presidency in 1978, the country had just one university, the University of Nairobi, despite a high number of youth that sought higher education. This forced many Kenyan parents to send their children to study abroad especially in Indian Universities. In 1983, Professor Douglass Odhiambo spearheaded a taskforce that led to the establishment of Moi University and soon after Kenyatta University was established, becoming the third university. In August 1986 Egerton was opened after being gazetted as a constituent college of the University of Nairobi the previous year. At about the same time Moi established the Commission for Higher Education to regulate university education in Kenya.

To address the bulging number of learners who had a secondary education but did not proceed for higher studies, Moi ordered universities to increase student intakes from 3,000 to more than 7,000 in 1988.  All these efforts led to Kenya being ranked 1st out of 43 African countries for education outcomes in the World Bank’s new Human Capital Index, launched in October 2018. With more than 400,000 students and some 65 registered universities and colleges, Kenya is the regional leader in higher education, followed by Uganda with more than 200,000 students enrolled in around 36 institutions, according to the Inter-University Council for East Africa.

Through various taskforces, Moi utilized the advice of technocrats to help improve the quality of education from what the British had left to a more effective system.  The taskforces led to the introduction of primary school milk scheme in 1979, the introduction of the 8-4-4 curriculum in 1983, and the decision to double university intake between 1987 t0 1990.  The milk scheme provided free milk to all primary schools, while the 8-4-4 restructured the British education system which focused on merit in examinations as the hallmark of a learner’s academic progress. The Mackay Report of 1982 chaired by Prof. C.B. Mackay from Canada extended primary education from 7and 8 years and scrapped the A level component of secondary education thereby reducing secondary education to four years. It extended university education from 3-4 years.  The Report led to the establishment of the 8.4.4 system of education and introduced a new curriculum that would give greater orientation towards vocational education while removing undue emphasis on examinations centered education.

The Kamunge Report chaired by Mr. James Kamunge reviewed the National Education Training and policy (NETP) and made proposals on cost sharing as strategy for financing public education and training and recommended expansion of existing primary schools rather opening new ones.  The increased access to education, however, led to a rise in the number of unemployed secondary school and university graduates, and by the late ’80s had become a public concern.   Moi embraced collective contributions also known as ‘Harambees’ to fund the constructions of schools, universities and colleges throughout the country.  As a result of his legacy in building schools, many schools throughout the country adopted the Moi name and even after leaving the presidency, Moi continued to spend millions of shillings annually to support the many schools which were named after him.

It was during the Moi era that patriotism and nationhood was ingrained in the memory of every school going child.  Schools taught civic education which was loaded with aspects of national values and every  school going child was expected to memorize the Loyalty Pledge, stand at attention while hoisting the flag, and bow to all national symbols. President Moi sought to develop a sense of collective responsibility towards development; students were encouraged to actively participate in national development efforts through clubs like 4K Club and Young Farmers which encouraged students to Kuungana, Kufanya, Kusaidia Kenya (Unite, Do, Help Kenya).  Moi was a staunch Christian who worked with churches who invested heavily in education to ensure that schools promoted sound and moral religious value. The free school milk programme also christened Maziwa ya Nyayo in all primary schools not only improved the diet for school going children but also increased enrollment in primary schools as it was an incentive to school going children.

In 1982 after the attempted coup, Moi also introduced a compulsory requirement that all A-Level school leavers had to go through an induction period at the National Youth Service before being enrolled in any of the national universities.  At the NYS the students were to trained to handle, manipulate, and serve in different fields before joining the colleges. They were also offered paramilitary training to inculcate a spirit of comradeship and solidarity in case of any attack from group, army or terror group.  The compulsory NYS requirement was however dropped in 1988 partly to curb increased militancy among university students especially during demonstrations.

After retiring from politics, Moi created the Moi Africa Institute headed by Lieutenant General (Rtd) Lazaro Sumbeiywo.  The Institute has been instrumental in reconciling warring communities in Southern Sudan through the South-South dialogue and strived to bring peace between the warring Maasai and Samburu communities by building a primary school at their border. Other schools founded by Moi include Sunshine Secondary School, Moi Educational Center, Moi High School Kabarak, Kabarak University and Kabarak Primary, located 20 KM from Nakuru town on his own farm.

The writer is a former aspirant for MP Ugenya Constituency, political analyst and the Executive Director of the Global Peace Foundation in Kenya. Email: djuma@globalpeace.org